So the Smithsonian Channel has this show called "Rock 'N' Roll Inventions". Of course, Thermionic-Studios.com is a site where we talk about gear (mostly tube amps, and the heavy bands that play them) it seemed like something I (and you) would very much want to watch. I actually found it over the New Year's Eve / New Years Day break. As I recall, I was watching Smithsonian Channel, probably something about American History. I imagine it was either something interesting like the Civil War, or something... else, like "the current condition of lighthouses in New England". It would have been at this time that I saw "Rock 'N' Roll Inventions" previewed in a teaser as a show that would be coming up... I do recall that immediately after, when I attempted to DVR it, I was unable to do so because the schedule for this show wasn't yet loaded into the DVR. I tried searching for it and couldn't get the DVR to find the title to record the series.

So I wrote myself a note on a pad of paper so that I would be reminded in the next couple of weeks to record the series. It was a bit of happy circumstance then that I found that notepad about an hour before the show was supposed to go on (today!).

If you have Smithsonian Channel (you'll have to check your cable provider), this looks like it's going to be a very informative series.

The first episode provides some detail as to the technical state-of-affairs of the past 100 years or so that allowed Rock music to emerge as a musical and popular artform, going back to the 1890s when Emile Berliner took the 1880s Gramophone invented by Thomas Edison and improved it by changing the recording medium from wax cylinders to flat shellac platters. Interestingly, the same vinyl platters that are seeing their re-emergence today as the preferred means of collecting the music were an outgrowth of the original shellac platters. Vinyl records were far more durable than their brittle shellac counterparts. Just like the earlier flat shellac platter beat out the wax cylinder due to being far less expensive. What's also quite interesting is the discussion that covered the origin and purpose of audio recordings. According to this first episode, audio recordings were designed to capture the contents of business meetings and discussions. It was figured (by Edison?) that this would allow business requirements to be better captured than the practice of writing things down.

The series then shows the transition to recorded music, then leads into Rock Music and AM radio from the 1950s and the transition through the 1960s and 1970s and FM with the advent of the handheld transistor radio. It then continues through cassette tapes, the Walkman, then CDs, until we get to digital music and today.

You may think that what I've done is spoil the episode right here, but chances are you already know about the progression from vinyl records to digital music. There's a whole lot more in the episode that makes it worth watching.

More importantly, after going to the Smithsonian Channel's website, it looks like 2017 is the year that Smithsonian Channel has decided to embrace and provide a lot of interesting information on the genesis of rock and heavy music. February 7th, they're going to be showing a series about Huddie Ledbetter, or "Leadbelly" a pioneer in the blues movement that ultimately feeds into Rock.

But before that, actually in just a week, they're showing the beginnings and development of the electric guitar in a series called "Electrified" where it appears they'll be tracking from the first original 1920's Rickenbacker "frying pan" electric guitar and hawaiian steel style to today's guitars and amps. We'll be watching and recording this one as well. We hope if you didn't previously have a heads-up on these series that you'll join along with us and watch them. 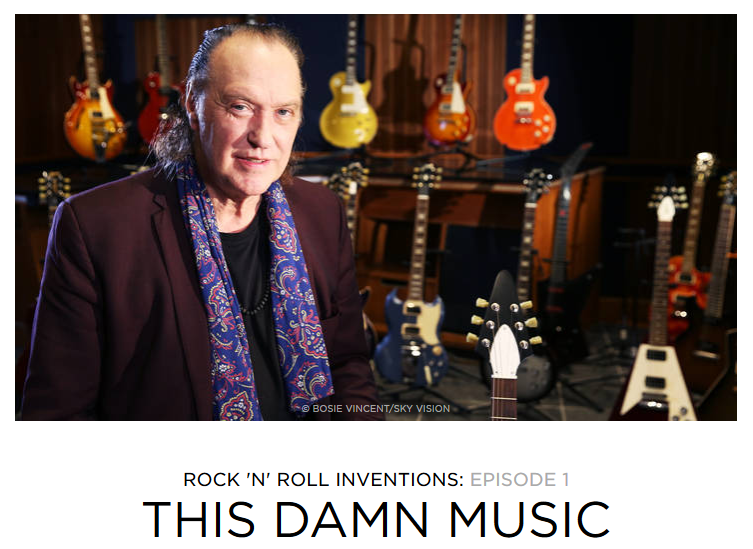