I went to Doom in June 2011 to loan one of our amps to Kent Stump of the band Wo Fat. Had an awesome time! When it came time to see about the followup, there was no Doom in June in 2012. Being out of the loop, I ended up missing 2013. This year, I'm going!

I got two beefs with the Cheyenne Saloon as a venue:
1.) They have these inconvenient pool tables in inconvenient places that make watching the bands less than optimal.
2.) The beer is warm.

I get that the pool tables represent income to Cheyenne Saloon when they don't have shows, but they are VERY inconvenient! Move those tables out of the way and put in sofas (awesome!) or at least more chairs or something! Ok, so complaints aside, the bands I saw in 2011 were really good. Well, ok, I didn't care for White Witch Canyon, and it's true that Dusted Angel didn't show up.

Other than that, it really was a great line up. Including Wo Fat, they had Wino play an acoustic set and one of our favorite bands, Solitude Aeturnus, headlined. Doom in June, Vol. 4 will be taking place June 6th and 7th at the Cheyenne Saloon in North Las Vegas. It looks like the price of the show has gone down. I remember paying $50 for the show in 2011. 2014's price of only $40.00 for 23 bands has gotta be biting into the wallets of the bands and and the organizer. The more that people show up the better it'll be for the bands; the better it'll be to keep doomfests like Doom in June going!

$40.00 for 23 bands really cant be beat in my humble opinion. Here's the link to get advance tickets:

Hope to see you there! 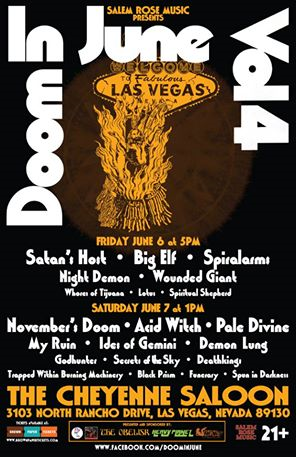