I put it in my basket and then I looked at the shelf and saw the price. "$14.00? For this? For 4 Iron Maiden beers? Seriously?" Actually, in the conversation I was having with myself in my mind, I spoke some expletives. I get that it's not unexpected to pay $6.00 for a pint of beer at a restaurant or a bar, but that's at a restaurant, or bar where you're paying for the experience of eating in a restaurant (or drinking in a bar or pub). $14.00 for a 4-pack seems like paying for a beer just because it has Iron Maiden's Eddie on the outside. Paying $8.00 for a premium 6-pack fits far more into my ethos of "getting value for money spent".

I put the beer back on the shelf and searched around a bit and managed to find a single bottle of Trooper Beer. "$6.00 for what might be an interesting story? I wonder if the picture of Eddie on the outside going to make what's inside taste better... At that price, it better..."

As you can tell, I chaffed at the idea of paying extra just to see the name "Iron Maiden Trooper" on the side of the bottle. Honestly, I think Trooper beer could be cool, if it was an extra $0.25 a can or so. I could see a 6-pack that costs $9.00, but a 4-pack for $14.00? This pricing seems incredibly cynical. All I could think of is sarcasm. "What a nice way to use your fans!" However, I resolved to give the beer a fair tasting. In fairness the cans were 16 oz, a full pint, rather than just the usual 12-oz American cans. So we're talking about 64 oz of Trooper beer vs 72 oz of whatever else might be chosen in a 6-pack.

So I brought the beer home. I chilled it. As I was chilling it, I did some research. Here's what I found on Iron Maiden beer: http://www.ironmaidenbeer.com/about

I continued poking around. This webpage absolutely floored me: https://iron-maiden-beer.backstreetmerch.com/

Merch about a beer? Really? Shouldn't merch be about the band? The fact that there's merchandise for beer substituting as merch for the band, again, seems like it's playing on band/brand loyalty of uncritical fans, as opposed to the band committing itself providing value.

I actually came to a place where I was going to complain that merchandise about beer when beer is ephemeral is a non-starter. But then I thought about it some more and I also realized that bands themselves are ephemeral. I guess I would describe the difference in that a band might be ephemeral, but that a band is about making emotional connections. These connections, whether true, or merely perceived, can be valuable both to the fans, and the band. But drinking a beer is drinking a beer.. Whoever thought this was a good idea seems clearly to care more about short term profits than a long-term artist-fan conversation and relationship.

I believe that the Robinson Brewery, listed as the brewery that made the beer made an earnest effort to craft a good beer, which, taste-wise, it is.

But the pricing and the marketing, is just too cynical for me. The flavor of the beer is almost spot-on for Sierra Nevada Pale Ale

Sierra Nevada is just about my favorite Pale Ale, and Pale Ale is just about my favorite style, but that a 4-pack of Robinson's "Iron Maiden Trooper Beer" should cost, at 4 cans, about as much as a 12-pack of premium Sierra Nevada just isn't supportable, in my opinion. As I said, I will give the beer a fair hearing, and truthfully the beer is good. In contrast, just a little bit ago, I tried a bottle of Mission Brewery Hard Root Beer. GAWD, that stuff isn't even drinkable. 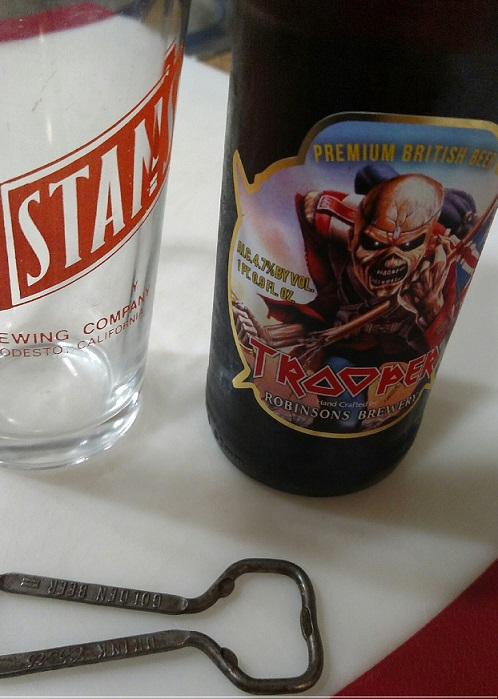 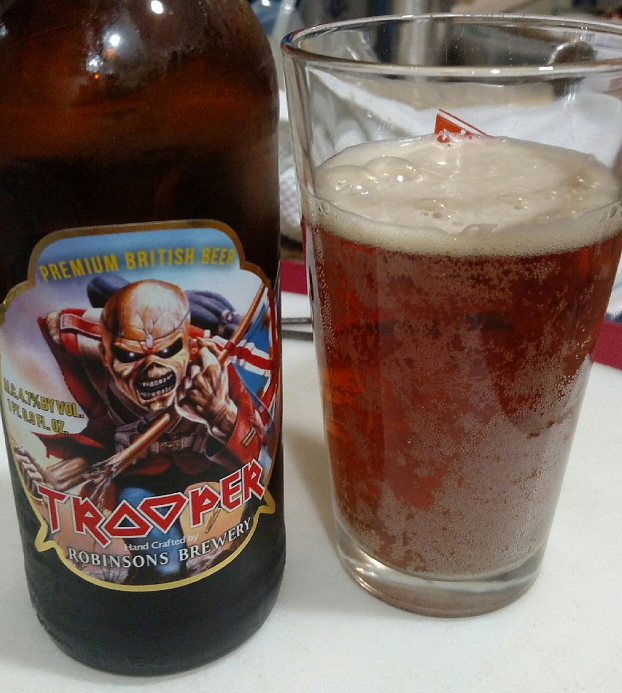