Posted by Zander on Wednesday, 24 February 2016

Hello everyone! This is a new sort of article for us here at Thermionic Studios. We've joined in collaboration with http://www.onlinebassguitar.com. We welcome them to Thermionic Studios and are excited to be able to provide a much longer, and we hope, a much more meaningful presentation of style, technique, and setup information.

We're thrilled to be able to present this along with Online Bass Guitar. Here's briefly how this is going to work: Since the recently-deceased Lemmy Kilmister of Motorhead is our shared subject, Online Bass Guitar is sharing information on Lemmy's playstyle, his technique, and any tips and tricks that can be had in playing bass like him. We here at Thermionic Studios will be reviewing the arsenal that was Lemmy's: His basses, his amps, his accessories, and anything else we've picked up over the years.

Was Lemmy a great bass player? Yes, and No. Technically, there are bass players that are far more technically gifted. However, fewer are as uncompromising with what it is they want to play, and how it is they want to play it. Please pay special attention to what we said regarding "Great musicians make themselves". It's not said often and it's not a particularly deep thing to say, but what we mean by it is that "Custom" or "Signature Gear" that you're encouraged by the music industry to purchase, happens after a musician is recognized as great. The instruments that great musicians hone their craft on are not signature models. They're the work-a-day models that everyone has access to.

No musician starts out with their own signature gear. Lemmy was no exception. Especially early on, he had to make choices about what kind of equipment he wanted to play.

Basses:
Today, Lemmy is most closely associated with the Rickenbacker "4004LK". This, admittedly, is a nice instrument; a four-string bass made by Rickenbacker with a neck-through design. And while it took some time, it did eventually become Lemmy's #1 instrument, but you don't have to own one to set yourself up to sound like Lemmy. Ironically, it was when Lemmy was joining Hawkwind, replacing Dave Anderson on bass, that he ever even started to use a bass, let alone a Rickenbacker. "I go out onstage with this bass around my neck, and it was a Rickenbacker, too. The bass player, like an idiot, left his bass in the truck."

The earliest verifiable information we have on Lemmy's equipment is, of course, from his time in Hawkwind. He joined Hawkwind having previously been, as he admitted it himself, a "rather bad" guitarist. This previous guitar experience would color the way that Lemmy played the electric bass. In Hawkwind, Lemmy didn't just use Rickenbackers, but also used an obscure German electric bass from a company called "Hopf". He used their Studio Bass model which resembles a Gibson SG. This bass is most notable for having been used on Hawkwind's breakout song, "Silver Machine".

You can see Lemmy play and sing 'Silver Machine' for Hawkwind, playing his Hopf here: https://youtu.be/MoZ_Lg21b14. The thing to note about Lemmy's tone in Hawkwind is that it's not particularly distorted. This is interesting because it was about this time that Lemmy got his first powerful amps (more on that in the amps section!).

Even as early as Hawkwind, and through Motorhead up until at least 1987, Lemmy also used a Gibson Thunderbird Bass. Lemmy was cast in a comedic movie called "Eat the Rich" where he plays the role of a Soviet spy (and amusingly, uses this instrument in the movie, on stage to perform "Doctor Rock"). What's notable about his use of the Thunderbird bass was his affinity for the hotter, higher-output pickups.

While Lemmy had his own signature model Rickenbacker, the ones he used the most over the course of his career, and the ones he's most associated with are:
1.) A natural quilted maple Rickenbacker 4001 curved edges and no binding on the body, and
2.) Another maple (but not quilted) 4001 that was bound, and customized. It was notable for having the text, "Born to Lose, Out to Lunch".
3,) The Rickenbacker 4004LK

Yes, we've finally arrived on the famous "Rickenbacker 4004LK". This bass is different from the 4001 model in that there are 3 pickups on it. If you've already been to Online Bass Guitar then you know that Lemmy only uses the bridge position pickup. So it's nice that this bass has 3 pickups, on it, but two of them are not necessary. What is helpful is that Rickenbacker wound these pickups to be hotter than their standard bass pickup models - you don't "need" to transfer GIbson Thunderbird bass pickups into the 4004LK. Ironically, this brings us to:

Pickups:
Wouldn't you know it, but that Seymour Duncan has a high-output Rickenbacker-style custom shop bass pickup, wound and named for Lemmy.... Aside from the fact that we have never seen Lemmy using these pickups, these would be at least a reasonable place to start if you have a Rickenbacker with weak pickups. In most cases, the pickups that come with your instrument, or inexpensive replacements will be a fine place to start.

Picks:
Lemmy was known to use 1.5mm width Tortex, and 1.14 width "nylon midi" picks, both from Dunlop while with Motorhead. What he used earlier in Hawkwind is only speculation. However, he did primarily use picks, as opposed to playing finger-style.

Amps:
Ah yes. The Amps of Lemmy... Strangely, despite his mantra of "same but louder", Lemmy continuously used a couple of 100 watt 1973 Marshall SuperBass amps, model number 1992. These became famously known as "No Remorse" and "Killer". Despite searching, the modifications made to Lemmy's amp heads are not readily available. If someone happens to get their hands on a schematic for the year 2008 model 1992LEM (Superbass), we'd be very appreciative. The report that caught our eye here is that AN ORIGINAL 1973 Marshall Superbass is a good bit louder than the re-issue "Murder One" from Marshall in 2008. Here's some thoughts on why:

Lemmy also is known for chaining his amp inputs together with a small 3 to 4 inch instrument patch cord. When done properly (hard to mess up on 60s and 70s Marshalls), each volume control, high and low, can be set individually with the result being that you get "channel mixing". With respect to the noted voltage issue, we tend to believe that Marshall is no longer using the same kind of older-style power transformers in their amps. Smaller transformers usually result in lower B+ voltages for tubes and signal. Of course, it's also an issue of the number of windings on the transformer.

After the 1973 "No Remorse" died, Lemmy replaced it with the original "Murder One" amp - which was also a Marshall Superbass but that had some internal circuitry modified to accentuate the midrange frequencies. This amp seems to be the amp that Marshall used as the basis for the 2008 "Murder One" amp. After Killer died, that one was replaced with "Marsha".

Cabinets:
His cabinets were made by Marshall. Most bass players use four 10-inch speakers. Lemmy, of course, went bigger to go louder... Lemmy uses two stacks, one each positioned stage left and stage right. These stacks consist of:
1.) The Marshall 1992LEM head, on top of a,
2.) model MF280L (four 12-inch speakers), on top of a,
3.) model 1979L (four 15-inch speakers).

Effects:
Lemmy is famous/notorious for not using any effects. It's been suggested by some that using an MXR Microamp can help goose a higher output tone, hitting the front of the amp with more volume than the bass would do on its own. We leave it to you to interpret this however you will. One thing to consider is to use a "Marshall"-sounding effect pedal if your amp just isn't cutting it for playing that sound. An example of such might be Tech 21 VT Bass DI+.

Thanks!
We hope you found this joint report on Lemmy's gear and technique by Thermionic Studios, and Online Bass Guitar informative. Be sure to like both sites on Facebook, and Google+, and please follow us both on Twitter! 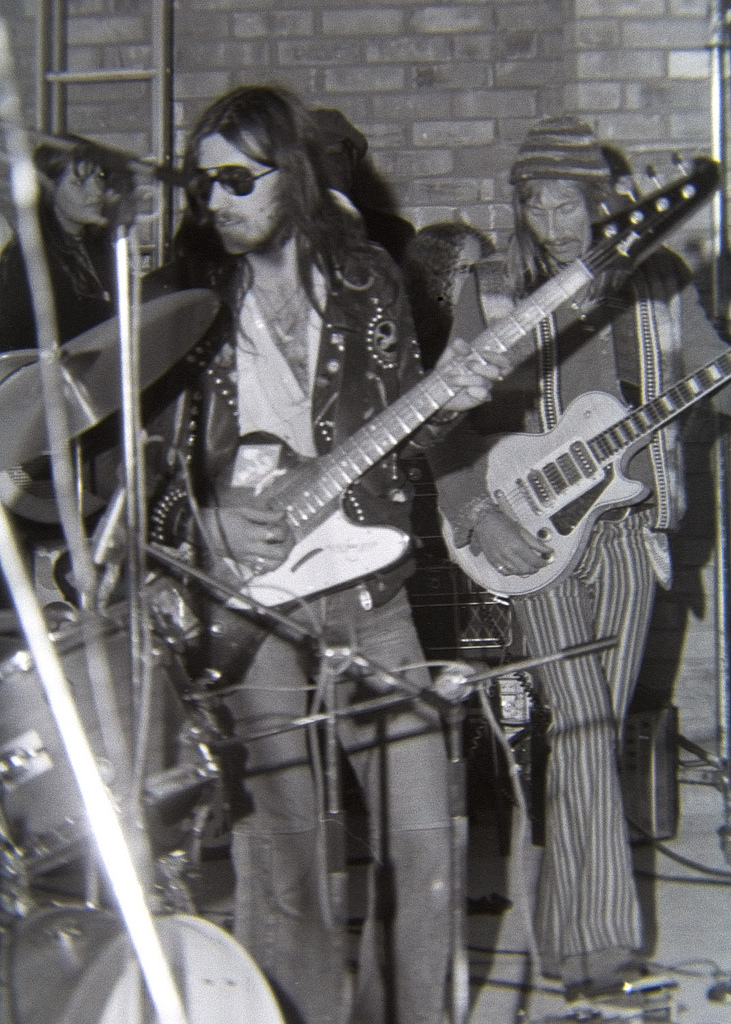 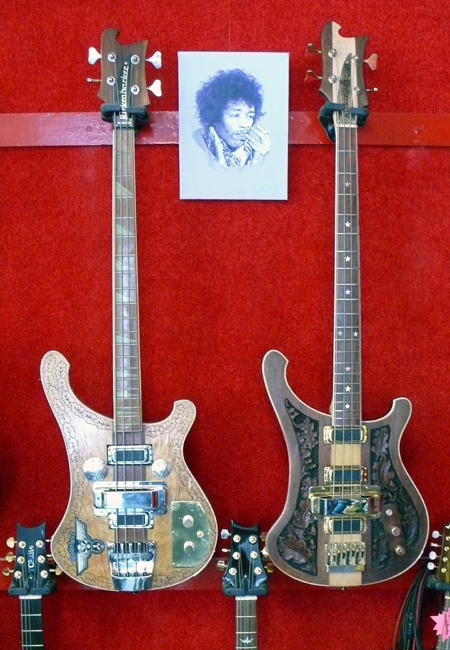 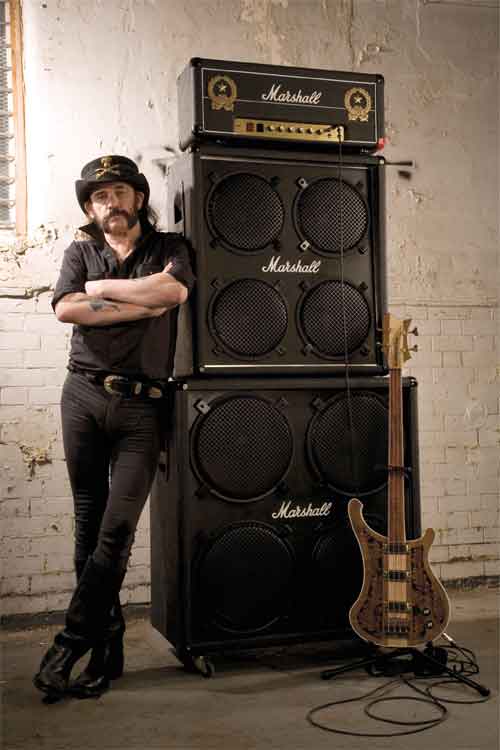