History of the ProCo Rat

Everybody seems to know about the KitRae Big Muff Pi Page, which, admittedly, is probably the most authoritative page on the internet about the history of the Electro Harmonix Big Muff distortion pedal .

It includes all the different versions, and each of the permutations of parts within each version.

What we didn't think there was an equivalent for, as the title of this article makes clear, was the same kind of page exulting the ProCo Rat... But there is!

We think KitRae dilutes the value of his page by adding his swords and stuff, but its his page, his business.

The ProCo Rat doesn't seem to engender the love affair with enthusiasts that the Big Muff does. This is interesting because:
1.) The ProCo Rat always came in a sturdier enclosure,
2.) The ProCo Rat always came with a professionally-printed circuit board,
3.) Since the Rat came on a professionally-printed circuit board, the parts mountings were inevitably sturdier as well,
4.) While individual Rat pedals have, of course, broken down... The situation is unlike old Big Muffs. The Rat pedal, and the ProCo brand do not have nearly the same reputation for breaking down as does the Big Muff.
5.) The Rat uses a "Darlington Pair" of transistors for "pop-free" function when switching the pedal on-and-off,
6.) ProCo never went out of business and The Rat, despite some production hiccups due to the company changing corporate direction, has been pretty much continuously available since its release in 1978.

We actually think that part of the "mojo" assigned to the EHX Big Muff does indeed have to do with the shifting versions, the constantly shifting parts, the changing production methods, etc. The fact that the Rat was more consistent, and sturdier, actually contributed to it having "less mojo"!

There are two "famous versions" of the Rat. The first is probably the "Big Box" Rat, that is best described by a "large", non-standard rectangular box that was wider than it was long. It has all the same controls and parts as its competition: the 1984 "Whiteface". The Whiteface was reissued a few years back and contains all original parts. Thermionic owns one of these.

Anyway - Check Out the History of the ProCo Rat!

We also found this interesting tidbit:
A quote from the Book 'Stompbox' by Art Thompson, published by Millar-Freeman Books. The passage starts 'Scott Burnham's story':

"I had the basic circuit roughed together and I'd found an op-amp I liked, the LM308N, which was an instrumentation amp used for seismic and medical sensors. I was experimenting with an EQ boost for this op-amp in order to pre-boost the treble so I could use just a passive tone control to cut back the highs. I was bypassing the voltage divider that sets the gain when I picked up a resistor, looked at it and thought to myself, 'yellow, violet, brown - thats 470ohm.'

I plugged it in expecting to get about 50dB of gain, but when I picked up my strat and hit a string , it went 'wooooo'. I thought, 'Holy (expletive deleted), this is cool. What did I do?'

I looked real closely and realized that I'd plugged a 47ohm resistor instead of a 470ohm resistor (sound familiar?). That meant it had somewhere around 70db of gain, which, according to it's spec sheet, was impossible from that op-amp. Trying to set the gain on this thing I had stumbled across a combination of resistors that produced this really weird high-frequency shelving boost that the op-amp couldn't possibly sustain. It didn't have enough slew rate to produce that much gain at those frequencies so it drove the op-amp into incredible slewing distortion. This usually is very bad, but in this case it gave the Rat it's 'yeowl' - I've never heard any other stompbox make that sound." 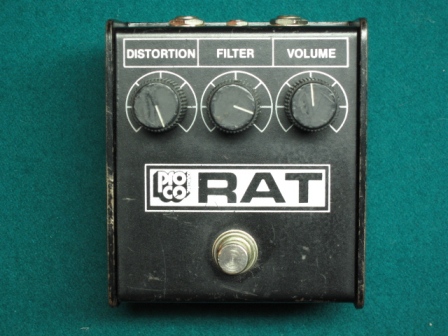