One of the great things about buying an album used to be the collateral that came with the album. It wasn't just the music. It was the other things that came with the music in the physical album. There was always a sleeve that came with the physical media (the vinyl record, the cassette, or the CD) that you purchased the music on. The least imaginative record labels used the sleeve to hawk their other bands. The better labels included not only the cover art, lyrics, and liner notes, but, also acknowledgements and thanks given to those who had contributed to the album or a band's success. The best examples, like below, include those times where a label allowed a band, or a band fought for, an included fictional narrative to help convey the artistic vision of the album. Purely ephemeral digital media has seen this disappear, and it's a shame, because, in our opinion, it was one of the things that helped connect artists to their audience.

Here's one of our favorite concept narratives inside the liner notes of Jailbreak, by Thin Lizzy, 1976. Transcription is authentic to a couple of instances of unusual grammar and/or spelling.

"THE JAILBREAK. The Warrior locked himself into his video scanner and gazed throughout the Universe... until he came upon Dimension 5.

DIMENSION 5 was now in the hands of the Overmaster, whose lust for ultimate power had become an obsession. Religion and the media were all under his control and computer files were kept on all known living persons within the city zones.

Many were arrested and jailed.

It was therefore significant that The Jailbreak represented a freedom for so many yet to those involved at the time it was a series of events, the outcome of which no-one could have foreseen. The plan was simple. By knocking out the alarm systems in a riot, they then would cause an explosion which would blow half the cell blocks away. Outside help came from an organisation known as Phono-Graphics, who if the plan was successful would eventually capitalize on the whole project.

The night of The Jailbreak all hell broke loose. A Red Alert was issued by the Overmaster himself. Robot trackers, military police, dogs, and all available vehicles were on the hunt. All were caught, except four, who made it to the Rampic Buildings on the south side of the city. It was in these buildings that they broadcast and recorded selected material, some of which still survives today. Through these recordings, they built up a following who eventually took to the streets in what was to become the Final War.

The Warrior had become wear and disillusioned with war, but seeing how the people struggled to be free he knew once again he must raise up his sword...

The music sailed out into the night then upward towards the skies, traveling on that thin border between reality and imagination."

Wow, look at what we found! http://www.nolifetilmetal.com/thinlizzy_cds.htm. 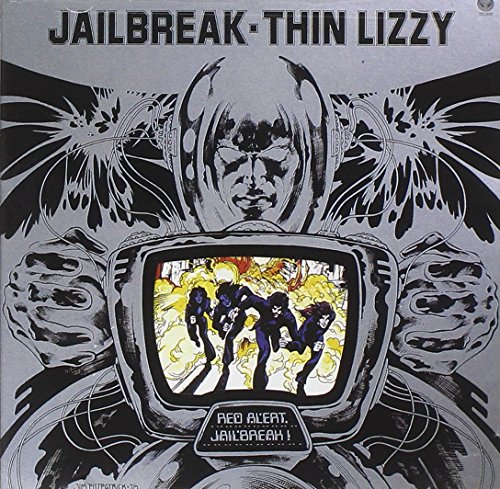