So everyone here at Thermionic Studios is a huge fan of the Tony Iommi wah-wah sound on Electric Funeral. And it's mostly because we don't hear that wah sound anywhere else.

A few years ago, I happened upon a posting by Tony on iommi.com where Tony described his effect pedal board. The site has changed around a good bit since then but the notes about his pedalboard are pretty much the same. One of the big differences is how prominently he currently states his use of the TycoBrahe wah-wah pedal (called the Parachute Wah), and his use of (since the original TycoBrahe Sound Company is all but gone) a clone of the Parachute Wah.

The Parachute Wah is not like any other wah-wah pedals currently available today. Unlike the popular and ubiquitous Crybaby / Vox model of wah that was first developed by Brad Plunkett in 1966, the Parachute Wah (also known at TycoBrahe as the "Parapedal") does not have an inductor. If one goes looking online for the "magical wah wah mojo" that's out there, the first thing you'll run into is how "the inductor" is so important to the wah wah pedal circuit". Granted, every component in a wah-wah circuit has its place and effect, and while inductors have been singled out as being the most important piece, some time spent inside the guts of a wah-wah pedal, and some time spend swapping different pieces and values out for others will reveal a different story.

You may recall last December, I posted an article about Jim Dunlop's wah wah pedal movie. If you haven't seen it, go check it out. At any rate, the point I'm trying to make here (and I'll make it more powerfully in a different article - one about wah-wahs!) is that if you know what parts to tweak, you can get a much more extreme kind of sound out of your wah-wah pedal than you will just by swapping out the inductor...

The Parachute Wah is inductorless. But it has the biggest, hungriest wah sound I've ever heard.

But we're getting side tracked. The TycoBrahe company also made a few different effects pedals, but in their day, at the height of their game, they were known for something far more important than wah-wah or Octavio pedals.

As you can see in the attached picture, the TycoBrahe Sound Company provided the amplification for the Cal Jam show in 1974.

Unfortunately this TycoBrahe Sound Company exists in name only. Go click. You'll see what it is today. 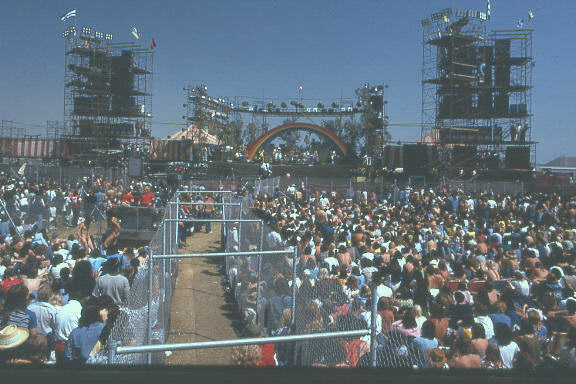