We need to offer some background on this letter first:
1.) It would appear that Chris LeDrew originally found this posting at the beginning of 2013.
2.) It appears to have been reposted by Chris, or someone known to Chris who gave him credits at On Stage Magazine.
3.) Presuming the chain of custody and the chain of information is correct, this Craiglist posting was listed briefly in the Tampa site, presumably under the "Discussion Forums: Music", or possibly under "Personals/Rants and Raves"

So that's our best information regarding this "response" to yesterday's manifesto from a musician to a club owner. After researching everything, they do not appear to be linked, just coincidental. We are very grateful that Chris LeDrew posted the letter and made it available for OnStageMagazine.com. This missive does not appear to be the "manifesto" that Bill Lonero's is as it only has three bullet points.

We think there's actually a lot that bands can learn from this letter. For example on getting a show: "You've got maybe 60 seconds to make your 'elevator pitch' and just a few more minutes to make it stick. There is a sales technique I'm seeing that's impressive stands out and really works, but out of respect for the bands that figured it out, call it a trade secret."

As we said earlier, we're grateful it was captured before it got rotated out of the article circulation on Craigslist. 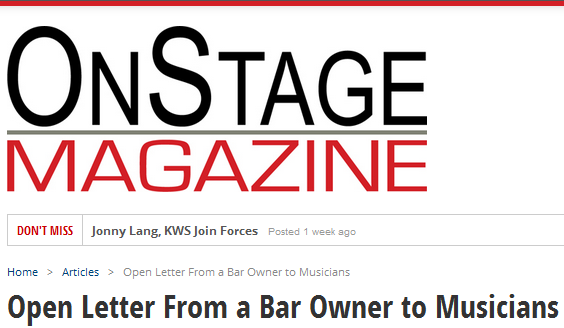