Steve Albini was recorded giving his thoughts on what one has to do in order to record drums well. This video was taken around 2005 at a convention called "Tape Op Con".

There's quite a wealth of information here in the video considering it's only about 30 minutes. Steve talks about such things as dealing with phase cancellation, using compressors as noise limiters, using a de-esser instead of a noise gate (as gates can make drums sound odd). There's comments on using hidden microphones dangled inside of drums to get different sounds, even how using a ring of keys will help make your recording of the drum kit easier. In our opinion, this video could substitute for a beginner to intermediate level primer on recording drums.

The image shows two different views of the same waveform. So as to make sense of what Steve is talking about with phase cancellation, consider this single waveform being a drumskin that is vibrating after having been hit. The up-and-down vibration of the drumhead creates the up-and-down of the sine wave. Also consider the example that Steve is discussing, the use of two different microphones. One microphone is pointed at the top of the drumskin. The other microphone is pointed at the bottom of the drumskin.

Referring to our example picture, the top waveform is the sine wave as seen by the diaphragm of the top microphone, and conversely, the bottom for the bottom. Note that as the drumskin is GOING AWAY from the the top microphone, that drumskin is GOING TOWARDS the bottom microphone. Of course, the converse happens as well. If you were to put these two sine waves together, you'd get a series of figure-8s all lying next to each other. The problem, from a sound recording perspective, is that when you sum the two sinewaves together as you normally would when you're mixing a recording, the signals cancel each other out.

If this is hard to get your head around, don't worry you're not alone. That's why we included "Point A" on the diagram.

So if we add the two signals together WE GET NO SOUND!

This is the same principle that is taken advantage of when you wear noise cancelling headphones. 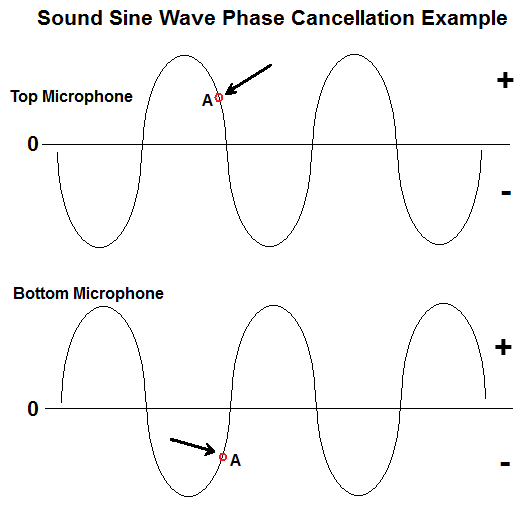