With all the hardship that's been going around with Covid-19: the unemployment, and people not being able to eat and getting thrown out of homes, it seems really self-centered and self-indulgent to make posts about buying stuff. I am very grateful that in addition to pursuing this business idea, I've been able to remain employed and employable this past year.

What you've not seen that has been going on is a lot of updating of the (wiki) and of the pedals we've been accumulating. We've been documenting pedals, and pedal kits, pcbs, and keeping track and sorting all of the parts necessary to build all the pedals that we think will be awesome contributions to HEAVY SOUND. What you may not have seen is that on the wiki, we've either been creating new articles on the pedals we have, or have updated a lot of the articles on the pedals we have or are in the process of building. One of the things holding us back was getting the final pieces for the PCBs we've wanted to assemble into pedals that you wouldn't be able to get anywhere else.

If we're going to build exclusive, high-quality pedals, then we also recognize that we need to do this in the right way. No shooting in the dark. We're not going to detail here in this article ALL the pedal kits and PCBs that we've been accumulating. What we will do is create a the list of pedal kit makers and pedal PCB makers that we've purchased from, and we'll also give a list of the parts suppliers from which we've purchased that mythical "$2.00 of parts" you might always hear about if you've been chasing down the lore and craft of amps and pedals.

As of now, in addition to our amplifiers, we have about 250 pedals that we're making available to musicians (aspiring and professional) for rehearsal, for public performance, and for recording. We have been accumulating these pedals for HEAVY SOUNDS, for INTERESTING SOUNDS, for ease-of-use, and for rarity. We're building for quality.

Let's touch on the issue of "rarity". Many "sought-after" pedals are going for a pretty penny these days. Whether these pedals be rare because they're vintage, or they're rare because they're part of a limited run, or they're rare because of other hoodoo factors, these are the sort of pedals we've chased down. Only when we cannot get the real deal, because the original pedal maker no longer exists as a company, or no longer makes the pedal or has abandoned it, only then have we have sought clones or work-alike alternatives. The Harmonic Percolator? The guy who invented it died. He's not making them anymore. Originals are only available used and $1500? We have no problem with cloning or building "work-alike" pedals.

Please understand, we do not believe in "cloning" of pedals when there is still a creator who invented the circuits, is still selling them for reasonable prices, and supports their work, then by all means, support that pedal maker. We will. 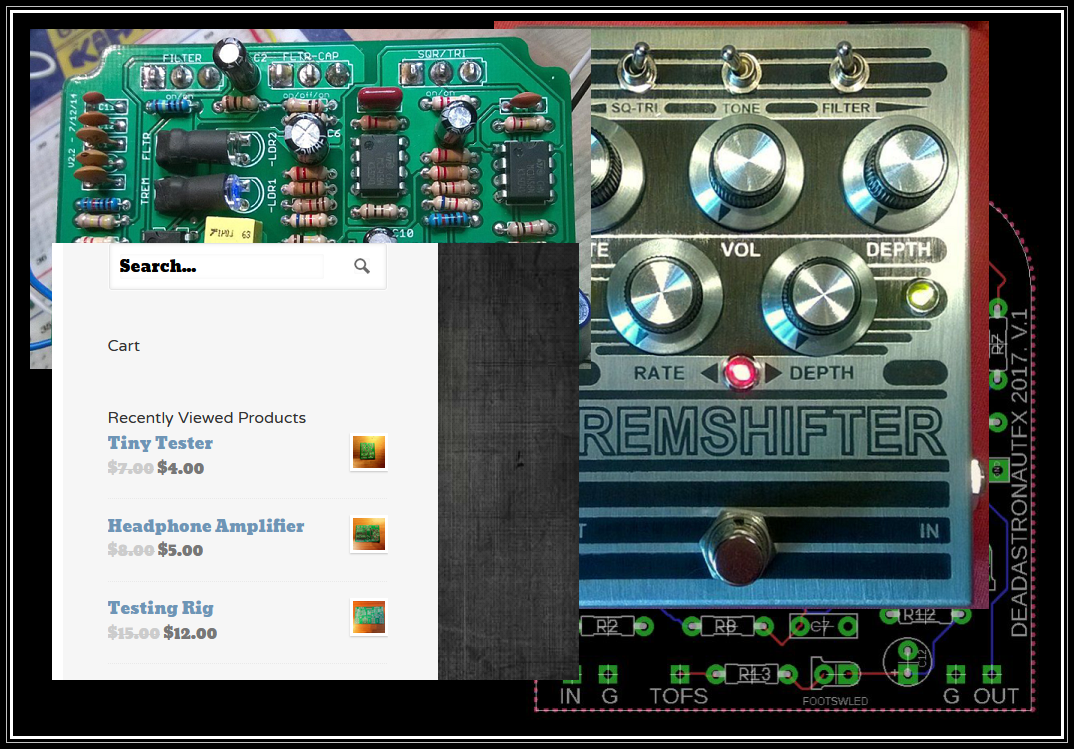 The broader scope, however as mentioned above, is that there are a large number of pedals that have been abandoned by the original maker, or for which the maker, as a commercial interest, no longer exists. An example of this phenomenon would be the Maestro Brassmaster. The Brassmaster is a bass overdrive that is no longer made. It can only be found on the used market, and when it can be found, is typically found for $1500 or so.

We're also trying to make unusual heavy textures available to musicians who might be looking for a particular sound, but can't find it in the conventional pedal selections that are on the market. As nice and convenient as MXR, Boss, Electro Harmonix, and other commercial pedals are (and we're making a wide selection of those available too!), there are times when only going off the beaten path is going to get you want you want.

So here's a quick rundown of the pedal kit and PCB makers whose original designs, and adopted orphans that we're building pedals from:

Couple of notes: Grind Customs FX is missing a link because it has effectively been shut down. Rej who was the main force behind Grind Customs pretty much lost interest, diverted himself to working on cars, and Grind Customs as an ongoing interest, has sort of just withered away... Jeds Peds has changed their business model. Previously they sold a combination of PCBs and kits but have now changed to mostly selling full kits. We have some of the older PCBs that they that they no longer offer, and will be putting those together. Most specifically, we're excited about their Supro Amp emulator and the proposition of creating a couple "double" (Super Hard-On) "Krackle-Boosts". Most recently, they have a new PCB we spied for something they call the "Lockdown Lunatic" that looks pretty cool. We don't have it and after having seen it, we may be experiencing a little bit of "FOMO".

On the larger front, we're ramping down the accumulation effort that we've been pursuing for a while (a few years) and now with finally having made the necessary investments in the pedal enclosures, we're about to start building. We're going to be documenting every step of the process for ourselves (if only to troubleshoot issues later), and while, hopefully, sparing you from the excruciating detail, we will be sharing the insights and knowledge that we develop along the path.

We have a good direction and focus. As we work through the inventory of parts into products, it'll provide fertile ground for a whole lot of interesting content here.