What Happened to Rock Music?

So we have a big problem. The problem is that this journal or "blog" (I hate the term 'blog') doesn't get updated frequently enough. It doesn't get updated frequently enough because I don't feel like "Hey I just updated this page describing the Boss DS-1 Distortion on the Wiki" is really all that worthy of journal updates. I am under the (perhaps misguided) apprehension that if you come here, it should be because you've come to expect this place to be filled with intelligent, thought-provoking, pithy expositions on how we fix amps, how we build amps, the state of heavy music in the world today, the latest amps that we've procured and why they're important to heavy music, etc...

And yes, I and others can write about all of those things, but if we're going to be doing that, then the we have to ask the question about whether we have the time to do the necessary research, work our day jobs, do the day-to-day things like update the Wiki with our gear collection, and so on and so on... and then do we still have the time to properly interact with our families and have lives? The truth of the matter, is that I read other websites on an ongoing basis DESPITE the lack of super-pithy commentary. So it's clear that updating consistently is more important that intermittent posting with high-quality. This is my / Thermionic Studios problem and it's ultimately a vanity issue with my demands for only super-high quality content. This vanity issue needs to be broken...

So, anyway, while taking some down time last night, I was watching a Youtube Video with Leonard Susskind (from Stanford University) giving a lecture how our 3-dimensional Universe can be represented as a 2-dimensional hologram. And while this isn't immediately germane to loud amps, louder rehearsals, and heavy music, the lecture provoked some thoughts, and I ended up posing a question to Google about something I've been thinking about the nature of the universe: Since the Universe is constantly expanding, couldn't matter just be "coming into existence" as the universe expands?

Quora.com had an answer: The cosmic background radiation (evidence of the Big Bang) shows that there was an event where all the matter in the universe was created, thereby repudiating the steady-state universe theory. I guess a universe that is constantly creating matter as it expands is part of the definition of a steady-state universe. I still have more questions about the nature of the universe, but that's for another time, and most probably, a different forum...

The reason I brought all this up, is that it was an unlikely set of events that found me at Quora.com, and whereupon that I actually found and read article that I felt was "pithy" enough to be actually sharing with you...

I think Ben (the author below) articulates the problem of rock music quite well. I used to work in radio, actually... From 1996 to 2001 in fact. Most of my time was here, where I interned, and eventually got on the air! I saw many, if not all the problems that Ben articulates in his article below. My only problem with his analysis is that it fails to take into account hip-hop, country, and other music formats that are currently doing quite well, as it would seem that they would have to follow a similar path. But it's an interesting analysis and I think it deserves greater exposure. So here I am doing my part. I'm sending Ben a message now that I'm reposting his article. Hopefully I will get permission to keep it up!

The way the music industry once worked is, you had a local band that was popular in one or two cities in America. A local DJ would attend a local show, or the artist would walk into their local radio station and ask the DJ for a promotion with cash in hand. The DJ would listen and if that DJ liked what he heard, he would play their music on his station.

This was the model that worked across the country, so a local act would get exposure. You had radio DJ’s that had a connection with their local area to promote local acts. The Beatles started out in Washington DC. Grateful Dead in San Francisco. Beach Boys and Byrds started out in Los Angeles. It was a very diverse environment that fostered creativity and new genres that would otherwise get no exposure.

Starting in the 1980’s we began to see the FCC starting to loosen their rules. They began to deregulate the industry. The tomb stone that really rocked the world though happened in 1996 under the Bill Clinton administration. It was called the “1996 Telecommunications Act”. This created a massive shift in how we consume our entertainment. Congress required that every two years, we look at FCC regulations to cut in order to in theory “spark competition”.

What does this mean for our music? Almost every radio station in the country now has no connection to the local music scene where folk and rock & roll were born. We went from over 15 genres being played on the radio, to only one. Clear Channel likes to play what sells, so you get your choice of pop music or popular music. You can’t walk into a radio station anymore and ask the DJ to spin your record. DJ’s no longer control the playlist.

This also had an effect on local music venues that had to shut down after 1996, because Clear Channel books the vast majority of music venues through iHeartRadio. In order to get your music played on the radio, artists are encouraged to book through them. That’s why we have the iHeartRadio music festival every year. The local rock clubs and folk scene in Greenwich Village and San Fransico streets, in Laurel Canyon are no longer standing. Some examples are Fillmore East & West, The Avalon Ballroom, Studio 54, CBGB, Webster Hall, Max's Kansas City, all gone. This was known as gentrification.

Not only radio, but this had a major effect on record companies as well. Again prior to 1996, music labels were not owned by parent corporations. Throughout the 1990’s there was a major buyout of music labels that were struggling to stay afloat economically. Parlophone sold to Warner Music Group in 2013. UMG bought EMI, Decca, Polydor, and Virgin in 2012. Sony bought Columbia, CBS Records, and Mute Records in 2004. Motown now owned by UMG sold in 1988. Herb Alpert’s A&M label responsible for bands like Supertramp, Styx, and Police went defunct in 1999, and Roulette went defunct in 1989.

How about those political songs we all grew up to love from CCR’s “Fortunate Son” to “Ohio” by CSN&Y that protested the Vietnam War. The New York Times reported in 2003 that many artists avoided making music that was controversial or spoke out at the time against the Iraq War, for fear that their songs would not be played on the radio. They blamed it on a direct result of media conglomeration. A great example of this was that in 2003, Dixie Chicks were banned on Cox Radio and Cumulus stations for stating that “We’re ashamed the President of the United States is from Texas”. One of the downfalls of this large ownership, is the greater ease of censorship possible.

So the environment that really allowed rock and folk music and other genres to flourish in the 1940’s through the 70’s no longer exists. Radio stations no longer take requests, and the local music scene is no longer getting airplay. Local music stores have shut down because they can’t get their music played on the radio. If I wrote a great rock song that sounded like the music from that time period, it would never get airplay. I can’t call up a radio station in Boston or NYC, give them $100 and ask them to give my band a chance. You just can’t do that anymore. Until we adopt stricter FCC rules again, and restore public radio democracy nothing will change in the immediate future.

So you wanted to know why rock music is dead? It’s not dead, it has just moved underground and is waiting to come back when we allow it. There are still a ton of rock and folk festivals like Lockn’, Mountain Jam, High Sierra, Gathering Of The Vibes, Bonaroo, and Newport Folk Festival where you continue to hear great rock and folk bands, but you’ll never hear them played on the radio. It doesn’t matter how great of a musician you may be today. If you can’t convince one major corporation that you are worth it to them, you will be blacklisted on American radio and television. Ironically the country that started rock & roll, killed the genre in the public eye for many years to come.

And yes, I will attest to what Ben says with Rock, Hard Rock, and Metal going underground. There's actually a huge and wonderful explosion of music - across all genres - happening right now on sites like Youtube, and Bandcamp.com, We have found amazing music at Bandcamp.com. 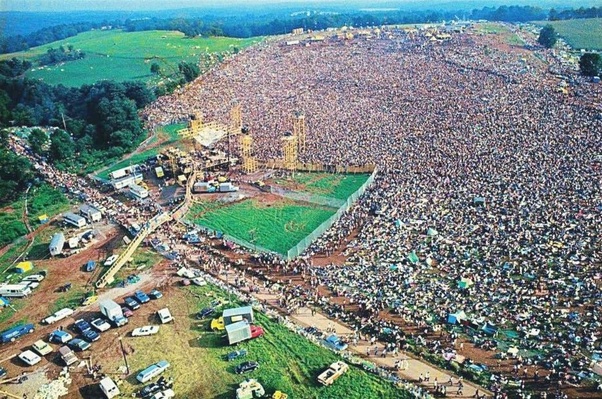