Carvin Amplifiers: Going Out of Business

For us, we'd be interested in a Carvin X100B - as we believe this represents the pinnacle of musical tube amps for Carvin, but also helps us here at Thermionic Studios to maintain a consistent aesthetic of "Louder Rehearsals". Yes, we know the market preference right now is "smaller amps". Like everything, tastes will change, and the pendulum will swing back. But, for us, we're far more interested in the used market and of rehabilitating specific amps that can be gotten inexpensively. And, yes, unfortunately, that means we're about as ruthless as a pawnshop when it comes to the prices we're willing to pay. With Carvin ending their production, we're going to wait a while as we know this means that the market for a Carvin X100B is going to drop and stay depressed for a while until "Cheap Carvin amps" come back into vogue and start commanding the prices that vintage Traynor YBA-1s, and Sunn Model-Ts are now commanding.

Make no mistake, we feel bad for Carvin Audio. It's always a disappointment when a business can't see a clear path forward. Candidly, we're surprised it's taken this long for them to get out of the amplifier business. The competitive pressures in the amplifier business are enormous right now - and they don't show that they're going to be abating anytime soon. Despite massively increased competition domestically, the relatively-new advent of tube amps from China and other low-wage nations, it still seems like more people are getting into the "I'm gonna build tube amps" business. Clearly, this is because of the proliferation of schematics, discussions, and the ability to modify tube amps easily (so long as you know what you're doing). Any jockey with a soldering iron, a multimeter, and a dream can decide he's gonna go "build famous tube amps". Of course we're being a bit facetious, but we got an almost-loaded VHT chassis and headshell for $150 because someone overestimated their ability to succeed in achieving these dreams. On top of that you have companies that are working to build the next generation of not just solid-state amplifiers, but also digital amplifiers. It was about three years ago that we reached out to Lance Keltner, a musician from Austin who was building out what he considered his dream amp - the RetroChannel RR1 to get a schematic for our (luckily for us) amazingly priced used RR1. Even then in 2014, a year after he'd ended RetroChannel, he indicated to us by email that "It's a rough business" when we'd asked why RetroChannel had mysteriously closed shop. And for those that are curious, no, we never did get the schematic.

That was 4 years ago that RetroChannel closed shop - and they weren't even trying to build tube amps. We predict there's going to be a lot more casualties in the tube amp business. People are going to continue to beat their heads against the wall attempting to build tube amps and sell them at- or below-cost. Right now is a fantastic time to be a CUSTOMER for amps. If you're building them to sell them, times are rather bleak.

Given the current state of affairs, we'd categorize the market being split in three ways:

Anything else is pretty much going to be inexpensive solid-state and digital stuff that is made in China or other low-wage countries. This is going to be brands like Line6, Peavey, Fender, and Vox. It's still possible also to get the 44 Magnum from Electro-Harmonix (soldered together in China, assembled in America). The only other stuff that is going to get tube sound are things like the Kemper digital modelling amp (made in Germany), or the Studio Devil digital modelling software. For us, somehow, plugging into a computer just isn't the same...

The rest of the interest in getting new sounds or heavy sounds from equipment is now being more and more concentrated in the pedal space, which, of course, disappoints us but is also completely understandable. Wages have only recently started to climb for the average working stiff after being stalled for 40 years, and there's not enough evidence to show as to whether or not the recently achieved modest gains will continue.

Our hearts go out to those who designed and assembled Carvin amps and now have to find new jobs. Best of luck to you. Our best wishes for you to land on your feet promptly. 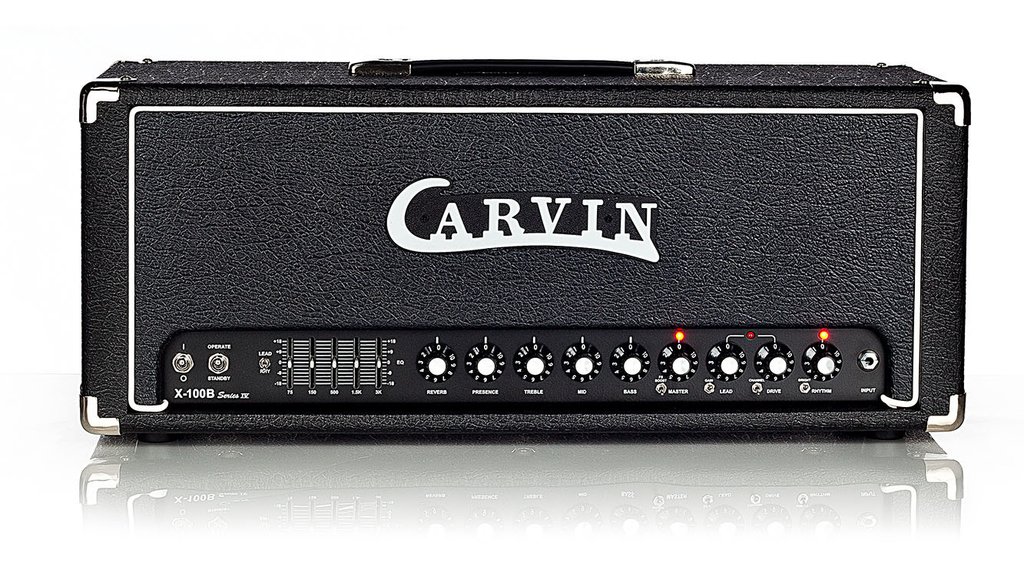